Commissioned by Barbican as part of Digital Revolution, an international touring exhibition, Assemblance is a collaborative immersive environment filled with three-dimensional interactive light-structures sculpted by people's gestures and movements.

Assemblance at the Barbican's Digital Revolution

Umbrellium has extensive experience in building interactive laser systems, having developed projects like Marling and created huge laser spectacles such as the one for Flightpath Toronto. For this commission we made use of the physical qualities of lasers in order to generate a magical experience for visitors.

A real pleasure working with the Umbrellium team and to see the realisation of such a spectacular work… the public love the work and critical reaction exceptional. I wouldn’t hesitate to work with Umbrellium again… Stunning.

A challenge in today’s dynamic urban environments is to develop interfaces that enable collaborative design, building and reconfiguration of space on the fly through responsive technologies. In Assemblance, a fully immersive interactive augmented reality environment made ‘real’ by using light as a physical material, the aim is to encourage collaboration and trust between people who must sometimes suspend disbelief in order to cooperate and co-exist as they build structures together.

Assemblance uses computer-controlled lasers to generate three-dimensional forms in air that are manipulated by people with their hands, feet, and bodies. An intensely collaborative experience, people interact with each others’ forms and spaces through sweeping gestures and gentle movements that leave walls of light behind and around them, building complex structures, or destroying them if they’re not careful. Structures are more stable and resilient when built together, and help uncover hidden ‘easter eggs’ in the space.

People interact with each others' forms and spaces 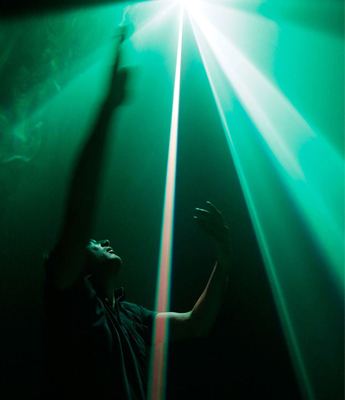 Drawing on our backgrounds in architecture and design of networked urban infrastructure, Assemblance uses light to construct a semblance of physicality in which people that don’t know each other gain enough trust to collaborate on building delicate, ephemeral, luminescent structures, where intimate and hyperlocal participation becomes even more important, and the question of our responsibility and culpability towards each other is thrown up in challenging ways.

Assemblance at the Barbican

In the nineteenth century, western society frequently described the distinction between ‘mind’ and ‘body’, which now seems quaint. Assemblance, encourages us to consider whether we might, in the twenty-first century, be making similarly arbitrary distinctions in separating ‘physical’ from ‘digital’ and ‘real’ from ‘virtual’.