A version of Augmented BMS, Cinder was deployed in 2016 in a new high-tech school building, Trumpington Community College, Cambridge, filled with sensors and sustainability systems.

Interacting with Cinder in augmented reality mirror and laptops

We were engaged by Trumpington Community College, Cambridge, in 2015 to develop a project for permanent integration in the new high-tech building that would help students learn about and understand the building’s sensor and sustainability systems. Over the course of many engagement sessions with both incoming students as well as teachers, we developed a concept for an ‘augmented reality’ interface to the building’s network that would enable occupants to make sense of the energy, environment and sensor data, and make decisions about the energy usage.

It has been a real pleasure working with the team from Umbrellium over the past 18 months. The students have been inspired by the project and [what] Trumpington Community College [now has] is truly innovative.

Guided by the students’ proposals from workshops, we developed Cinder, built on our Augmented BMS, which takes the form of a virtual cat that thrives alongside the high-tech building’s sustainability systems. Part interactive mascot, part avatar for the building, she responds in real-time to the state of the environment and its occupants. 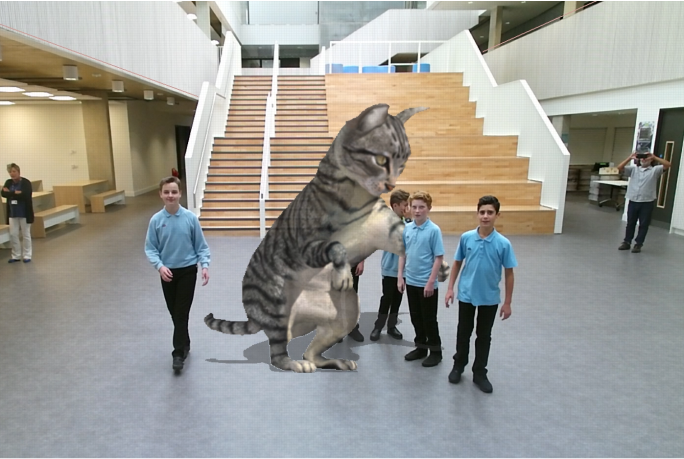 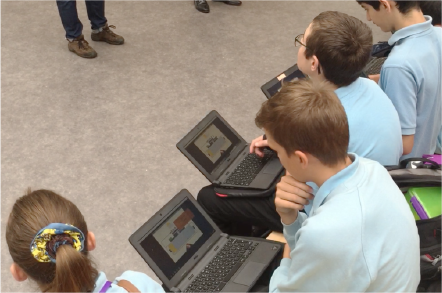 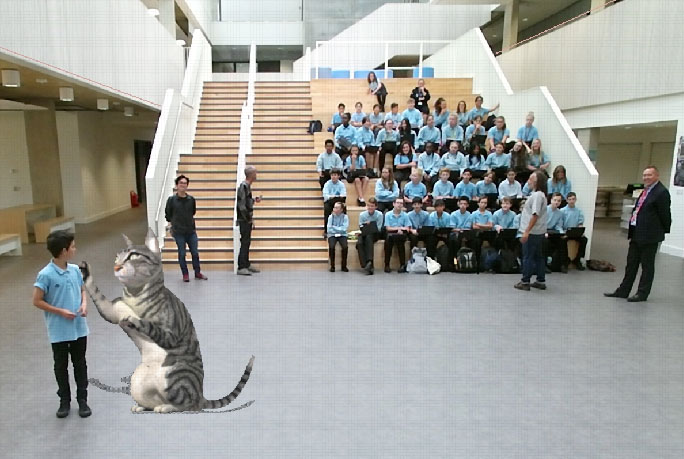 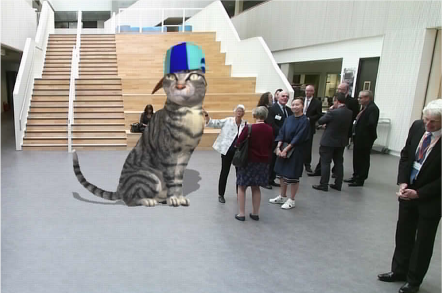 People play and interact with Cinder in the school’s main space, where she appears on a large ‘augmented reality’ mirror that ‘reveals’ her in the physical space of the atrium. Her behaviour and appearance are affected in realtime by sensor data, and by how people interact with her. Sometimes, she darts between people and holds out her paws to friendly gestures, and she might even shrink or grow. Other times, when she’s been too active or not had enough, to eat she scampers away, disappearing into the network to hunt for ‘food’ generated in realtime by the solar panels on the roof.

On sunny days, when more energy is produced by the photovoltaics, students will be able to feed her more food as she appears on their laptops, begging for attention. In winter, however, when solar food is scarce, her energy levels go down and she might be less motivated to play.

Over time, she changes size, colour and personality, responding as the surrounding environment changes and people of all ages interact with her. Every now and then you might even catch her dreaming of electric mice or donning a cap to celebrate a special occasion.

Workshops with students to design Cinder

Cinder was developed with assistance from incoming students, who will live with her for the next few years. Through a series of interactive workshops they helped determine her appearance, her behaviour and even some easter eggs that appear under specific rare conditions.